5 of the Most Common Cat Behaviors Explained

If your cat likes to hide, it isn’t because he doesn’t like you. If you’ve been trying to get your cat to be more sociable by dragging him out from under the bed, it’s only going to backfire. But, why do cats hide?

Being able to have hiding places provides security and allows the cat to feel invisible. If the hiding place gives the cat the opportunity to have his back up against something it also provides extra safety because he’ll feel that no one can sneak up on him from behind. If you set up comfy hiding places such as cave-type beds or boxes turned on their sides, you’ll give your cat a chance to remain hidden while still being in the room with you. As he feels more comfortable and has the choice of whether to engage or not, you may find him spending more time out in the open.

2. Why Do Cats Show Their Belly?

You’re probably familiar with the image of a dog rolling over on her back for a good belly rub. What does it mean when your cat exposes her belly and looks as if she wants the same thing? If you’ve obliged in the past, chances are your hand was met with claws and teeth. Is it a trap? Why do cats show their belly? What is she telling you by this confusing behavior?

In a secure, relaxed environment, a cat may stretch out on her back to sleep or enjoy a sun bath. It’s a sign she feels completely trusting about being in a vulnerable position. Don’t mistake this posture for an invitation to rub her belly because it will likely result in her grabbing your hand. Touching the bellies of most cats triggers this reflex behavior. The reflex is based on the fact that when threatened, a cat may take a defensive posture of rolling over to let an opponent know that she doesn’t want to engage in battle but if pursued, she will engage all weapons – teeth and claws.

3. Why Do Cats Push Things Off Tables?

Many people may describe this behavior as cats just being jerks or deliberately knocking things over to be annoying. For cats, this behavior makes perfect sense and certainly isn’t motivated by a desire to annoy. So, why do cats like to push things off tables?

Cats use their paws to investigate. It’s safest for a cat to explore an object with his paw before he puts his face close to it. Cats will also touch objects to test for potential movement during play, especially if they’re bored. Certain objects that fall to the ground and roll may spark play behavior. Cats may also knock things off the table as an attention-seeking behavior. This behavior gets repeated when it gets a response from you. The perfect example is if your cat knocks something off your nightstand by the bed in the early morning hours. If you get up and put food in the bowl to quiet him you’ve just taught him that this attention-seeking behavior was a success.

4. Why Do Cats Scratch Furniture?

Furniture scratching isn’t done just to sharpen claws and it certainly isn’t done to be destructive. So why do cats choose to scratch furniture instead of the scratching post? Typically, cats look for objects that are tall, sturdy and covered in a claw-appealing material. Objects also need to be located where the cat likes to scratch. Many scratching posts are too short, covered in a soft material and not very sturdy.

Last, but not least, it’s an emotional release. These are all much needed functions in daily cat life. If you’ve tried to convince your cat not to scratch, you’ll only frustrate her. Cats need to scratch. Provide a tall, sturdy post and place it where your cat is currently scratching. Sisal-covered posts are often most appealing to cats. If you give your cat a better option than the sofa, she’ll use it.

5. Why Isn’t My Cat Affectionate?

Actually, cats are affectionate, but we often expect them to show it in the same way as dogs. You may be missing signs of affection from your cat. A common sign of affection is when a cat rubs his cheek against you. If you thought that behavior was just marking, you’re missing the good part. It’s associated with affection, friendliness and familiarity.

Another sign of affection is head bunting. This is where your cat touches or butts his forehead up against you. Kneading is another affectionate behavior. It’s a throwback to kittenhood where kittens would milk tread with front paws to stimulate the mother’s release of milk. Many adult cats engage in the behavior on soft surfaces (such as our laps) when feeling content and happy.

There are many other affectionate signs from your cat as well, such as an upright tail flick when greeting you, displaying a vulnerable posture, slow eye blinks (also known as cat kisses), touching you with a paw or sitting close by. Your cat may even lick you or “groom” you, known as allogrooming, which is a clear sign of affection as well. This is how the cat mixes his scent with yours. And of course there’s always the magical, mystical purr! Although purring is complex and can be displayed in a variety of situations, chances are, the cat that’s curled up next to you is purring out of love and affection.

What Else Can I Do to Understand My Cat's Behavior? 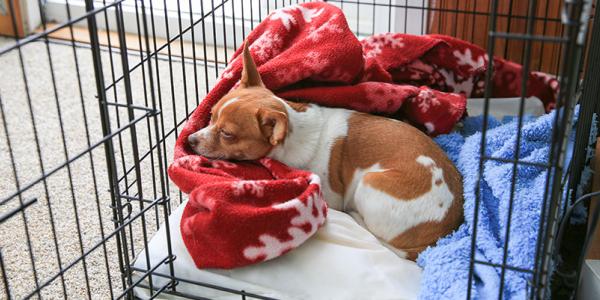 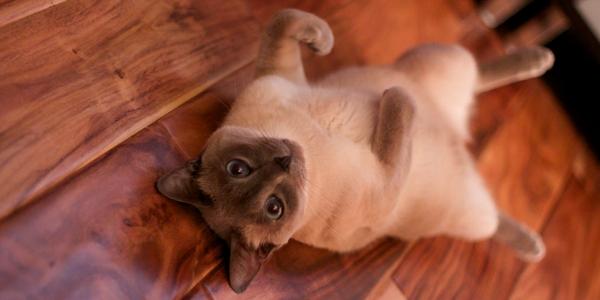 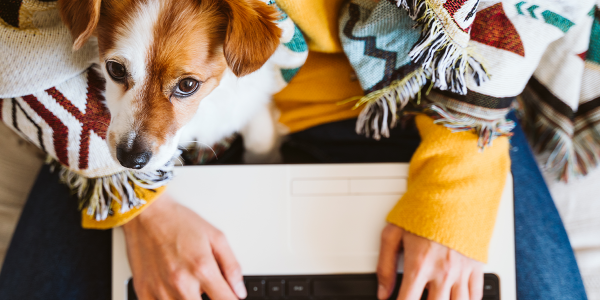